He’s 13 years old, quiet and very shy, but Jesper Lindell is the most talented football (soccer that is) player in his hometown Ludvika, a Swedish working-class town a couple of hours northwest of Stockholm. During a game disaster strikes, Jesper breaks a leg and is confined to his boy room and a wheelchair. His big brother Anton tries to cheer him up with an acoustic guitar and teaches him a few chords. Once he’s recovered, Jesper decides to give up football to focus on music. He starts a band, and the football pitch is replaced by a rehearsal room. This episode teaches Jesper two things. The basics of music and that it’s possible to turn adversity into something good.

Early on, Jesper’s friends and family understood that music was his right element. The shy young man found a new way to express himself. Not only with the guitar playing but more importantly with songwriting and singing. “Everything came so easy and natural to my brother, I couldn’t help but to envy him”, says Anton who has been Jesper’s bass player and #1 supporter all along.

When he was seventeen, Jesper moved away from Ludvika to attend a ”rock high school” in Örebro. There he co-founded the seventies rock band Almost Nature, inspired by bands like Savoy Brown, Grand Funk Railroad and Thin Lizzy. Two of the other co-founders, André Kvarnström and Kristoffer Schander, later went on to play in the internationally successful blues rock band Blues Pills.

It was during the time with Almost Nature that Jesper for the first time introduced one of his own songs to anyone outside of his family. “I’d been writing songs since I was 13, but this was the first time I felt that thing that makes music something more than just having fun, drinking beer and dreaming of becoming a rock star. It was a mind blowing feeling and I’ve carried that same feeling every day since. It made me realize that making music was my thing. Every new day is an opportunity to write better songs, to find my true voice and to develop into the kind of musician, singer and songwriter that I would like to listen to myself.”

After high school, Almost Nature broke up and Jesper moved to Gothenburg, where he worked as a mailman. “A lot of other musicians also worked as mailmen and while working I got to meet the guys that were to become my next band, King Harvest.”

The band name was taken from the song by The Band and it gives us a hint of the way Jesper’s songwriting was heading. “We didn’t really sound anything like The Band, but I listened to them a lot. And soul, Van Morrison and contemporary Americana, that I’d recently discovered. This was a period of time when I discovered a lot of the influences, songs and sounds that still are a big part of my musical universe.”

It is around this time that Jesper’s musical career really kicked off.

“The head of BMG in Stockholm heard a song that I’d written and invited me to his office”. King Harvest was in the process of disbanding and BMG wanted to sign Jesper as a solo act and a songwriter, to the label and the publishing company. “My dream was really to be able to play live and tour. And now I saw a great opportunity to make that dream come true.”

But the move to Stockholm and signing to a major label didn’t turn out the way Jesper hoped.  “We recorded songs for an album, but I never really got any response from BMG. I suppose they just didn’t think it was good enough. I still have that album on my laptop and today, I guess I agree. BMG also hoped to use me as songwriter and vocalist for commercial pop and EDM. I gave it a try, but it didn’t work out at all”.

For Jesper, this was a major turning point and a lesson to learn for the future. “The lack of feedback for my music was a blow to my self-confidence. And trying to make music that I didn’t like myself was really depressing. It got me to understand what I can and can’t do, what I have to do and what I must not do. If I can’t express true feelings in my music, I will lose my creativity and motivation. I must trust my instinct and only do the things that feel right.”

A tour as guitarist for the support act for old time hero Bryan Ferry restored some self-confidence and Jesper got the urge to make music again. After the tour, he started working on an EP for BMG with producer Benkt Söderberg and Sten Booberg, both from the successful Swedish eighties band Lolita Pop. Preparing for the recordings, Jesper developed his guitar playing and songwriting and once he got comfortable with the songs, he also found his true voice. Jesper remembers the recordings as a really pleasant experience “It was me, Benkt and Sten in the studio and I played most of the instruments myself, except the drums. Benkt’s daughters Klara and Johanna Söderberg, that is First Aid Kit, came down to the studio to listen to the recordings and suddenly they turned up behind the microphones, singing my songs. It was a totally organic process and a lot of fun since I’m a big fan of their music.”

The EP was released in 2017 and the track “Moving Slow”, with beautiful vocals by Klara Söderberg, became a minor radio hit. Today, the song is a streaming favorite with close to 5,000,000 streams on Spotify. Jesper’s friendship with Klara and Johanna got him invited to join the First Aid Kit Leonard Cohen tribute at the prestigious Dramaten theatre in Stockholm.

“I was nervous as hell but I learned a lot. It’s exciting, the show was recently released as an album and it seems to be a huge success. I actually sing on three of the tracks on that album.”

Following the success of ”Moving Slow”, Jesper got an approval (and budget) from BMG to record an album. But while the recordings (with Zack Anderson from Blues Pills as co-producer) were going on, some classic major label issues occurred. The people that originally signed and believed in Jesper disappeared. With a full album recorded and no real support from the label, Jesper decided to get out of the contract.

“It was a terrible situation, with Zach and all the musicians that had worked so hard in the studio. I paid my way out of the contract with BMG and released the album “Everyday Dreams” in 2019 on my own label in Sweden. Eventually the small, cool label Super Alive Natural out of California picked up the album for release outside Sweden. The single “Whatever Happens” got a lot of airplay in Sweden and in the US and it was also included in the American TV-series “The Council Of Dad.”

With the success of “Everyday Dreams” and the regained independence for Jesper, the old dream of touring and playing live was within reach. He moved back to his hometown Ludvika, built a studio and started to rehearse with a band of old friends. The fall of 2029 they did their first tour and in February 2020, they embarked on another major tour in Scandinavia with Memphis act Liz Brasher.

With two weeks left of the tour schedule, the pandemic hit and the remaining gigs were cancelled. Along with the 50+ gig summer tour of Scandinavia and Italy. As if that was not enough bad luck, Jesper was reminded of his congenital kidney disease, and his health rapidly got worse. A transplantation was soon the only option. While waiting for his dad to be approved as a donor, Jesper’s been in dialysis three times a week. The wait in the Corona year has been even longer, due to the overworked health care.

The bright blue sky suddenly had some big, nasty black clouds. The twenty-eight year old Jesper was back in his boyhood room. Remember the shy footboll guy in a wheelchair in the very same room, with a guitar in his lap. Jesper is still as shy and quiet, but his determination to fight against all odds is just as strong. During the past year in isolation, Jesper has written and recorded a lot of music, to be released in the next few months.

The first single ”Leave A Light On” is nothing less than a statement. Jesper Lindell is not a helpless victim of circumstances. He is a world class songwriter and a powerful singer, with a clear and uncompromising vision. As soon as his new kidney is in place, Jesper and his fabulous six piece band are ready to introduce their music to the world! 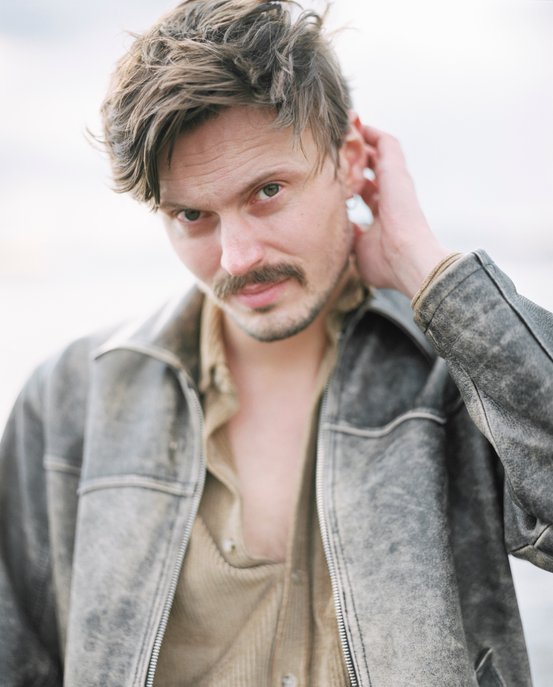